Long time not posted anything, the car is still alive.

There's still some other parts waiting for refreshing the rear  (Nismo silent block and Spoon rigid collars ) . I recently add Nismo rear Lower A-arm and upper link in the waiting parts following some remarks made during the annual mandatory technical controle.

If all goes well ( if my mechanics is available) the rear subframe will be taken out this winter, sanded,repainted and equipped with all the waiting parts for 2020.

In the meantime, I still drove it here and there:


At Montlhéry (not far from Paris) for the second edition of the Japan car festival.
In France seeing more than 2 or three skyline side by side is pretty rare so it was a cool meeting from this point of view :)


And then again back to Spa for the annual "Spa classic" event. As every year I joined the guys of the Datsun club (and being 50 years of the datsun Z, there was a lot of them :) ) .

So the rebuilding is complete and the beast is alive again :).


Still not sure about her future though ...Only time will tell.

For those who are curious, a list af the parts used for the rebuild :

Yeah, the 33 still exist (sort of) even if fate struck again...
But more about that later, now it's time to speak about what had been done in February alongside the strut tower renovation.

As I said in my previous spot, rust took its toll but now it's fixed. As the body shop seems to well know the R33 (for a continental Europe shop), I decided to do some others small fixes on the car. 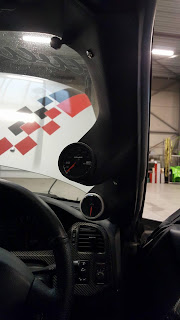 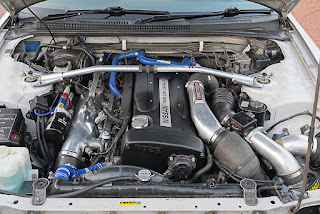 So at this point I was pretty happy, the car was nicely refreshed and the only step that was left was a remapping of the ECU. 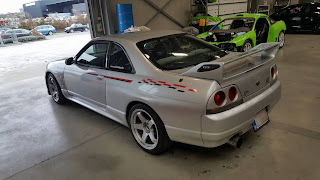 So begin May, I went by Evolve performance to take car of the mapping part.
All goes well until the car suddenly shut down ...
We check the oil pressure, timing belt, etc ... All seems Ok but the car won't restart  or only a few seconds and with a rattle sound totally not reassuring ...

As the boss of Evolve perfomance is also a Skyline owner and had already work on some RB26 by himself, I decided to let him the car for repairi ...
At this moment, I was so upset that my only idea was to repair it and sell it as soon as possible.

Basically, the bearing rod on piston n°5 welded with the crankshaft 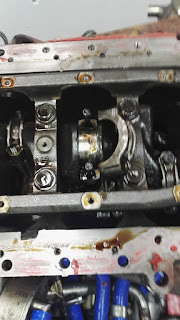 It seems that Nissan crankshaft have not the same dimension everywhere. When I decided to go on reinforced bearings rods, I asked the motorist which dimension I must take but he replied that the standard will be enough.
He was wrong but given my driving style with the 33 (more often cool than angry driving), it took some time to make some damage to the motor.

I'm some sort of lucky that it happened on a dyno and that the pistons and chambers were intact.

I don't go to forged piston partly for a question of budget and partly because I didn't seek for power.
Even if I kept it, I'd rather spend money on the chassis instead.

The work already begun and is now at this stage 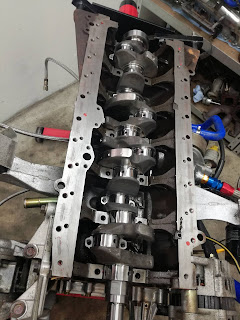 And here comes the question again. Just before part 2, I decide to keep the car regarding all the work done on it (and the stories that are connected to that car).

When the motor broke (again) , I must say that it was the last straw that breaks the camel back.
Since the begining it had been a love/hate story (or drive/repair).
I invested a lot of money (too much to be honest) in that car and the running costs/ upgrade costs are not low ( more if I look how much I really drive the car ) .
There's also two other things that I consider :
So the first reaction was : Fix it so you have something right to sell.
Six months later, I'm less decided to go to this route.
I suppose that I have to drive it a bit when it will be repaired before taking any decision.

As I already said some months ago , to be followed ...

From metal sheet to ... something better

As I said before , both front shock towers show some sign of rust so it was time to take care of it


After some search and personnal hesitation, I found a body shop which can take care of it.
The body shop's owner has a passion for japanese sports cars and had some gold in his hands.
He was kind enough to send me pictures of every step of his work so I'll let them here.
No words needed, the pictures will do the talk : 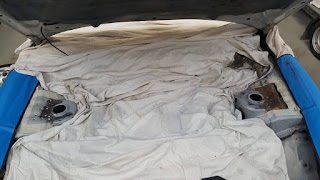 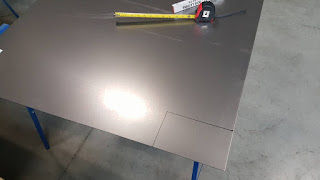 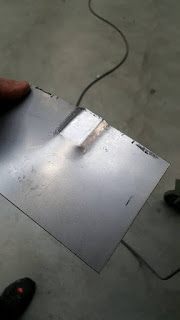 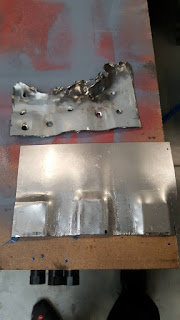 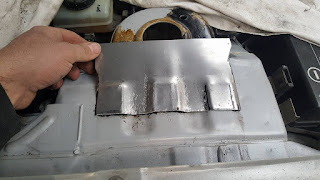 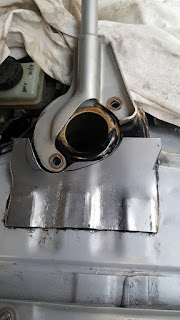 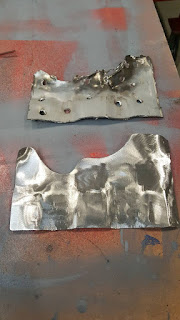 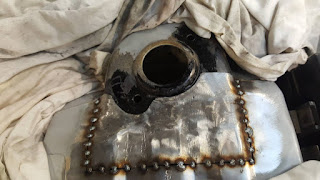 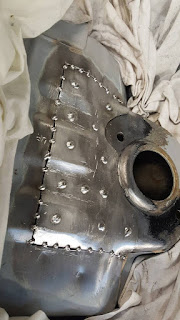 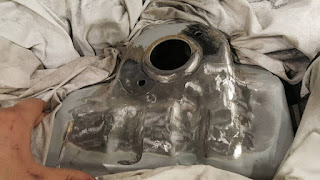 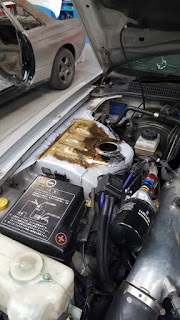 If you want to see the other side, you can see the pictures on my google picture album (just click).

The strut towers are not the only task planned  but it will be for another post in a few weeks (when all will be done).

Adventure will go on :) (Personnal chatting and future plan)

After much thought and some up and down about the GTR, I finally decided to go on with it.

After some fixing on the exhaust line (consequence of my previous offroad adventure ath the beginning of this year), I was able to drive it again.

As foreseen, I went to "Le Mans classique" with it and enjoy the 500km ride even with my still non working aircon (Ok, I admit that it will be more pleaseant with a working one).
Concerning the event itself it was huge and full of beautiful cars but I'm must admit that I 'm always a bit sad that there is so few old japanese cars outside the "Z"

But much more that 2x500km trip that's the small rides were I enjoy the car back. What I think finally decide me is some chating with during a photoshoot we made with two members of  Okutan 102 facebook page. 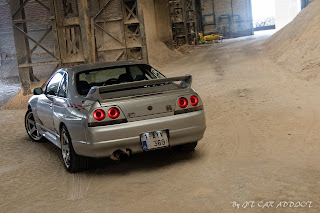 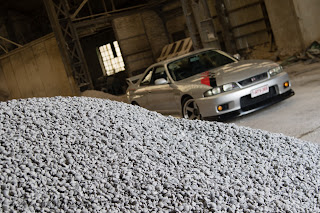 Even those two guys are more honda fan, they've a lot of passion for all japanese cars. I already helped them with my two other toys ( My 1976 Mazda 818 and my daily BRZ ) and it's always a pleasure to chat with them.
So speaking with them I realize that I only focused on the weak points of my cars and forget how lucky I was to drive such a car in continental Europe.

So enough sentimental chatting, let's take a look on what we'll come next.

First : front turret rust problem. It's a well known problem of our Nissan and my car was unfortunatly not spare by it. 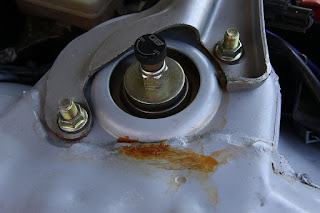 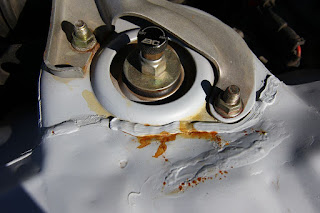 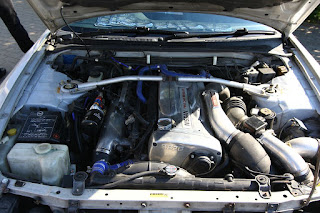 I'll try to find someone who could solve this AND my aircon problem in the same time during winter so I can enjoy my car fully next summer.

In the list of other jobs to do, there's also :
Once those change will be made, I will take care of the chassis with (in mid/longterm depending of the budget):
I did'nt abandon the idea of making a S-tune replica with my car but the price of those "simple pieces of plastic" vs real benefit of it made bumpers and side skirt replacement go down to the very bottom of the list.

So still a lot of things to do but decision is made to go further so  let's roll (and may be start playing lottery too :p ) 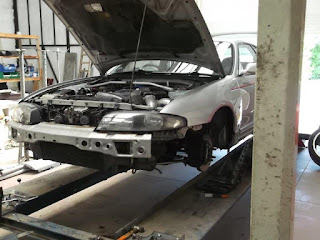 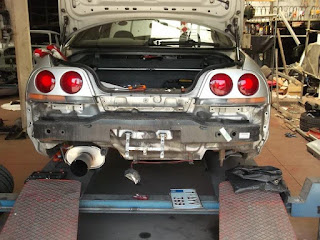 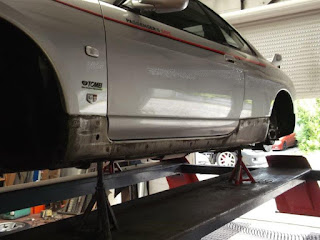 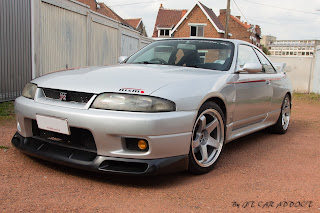 This week-end I had the opportunity to take the GTR for a spin on the SPa francorchamps track during the 2015 edition of Spa classics  ( More info here ).
When I speak of "take it for a spin", I didn't intend to take the expression by the word but as it was my first  "wheel on track", the risk stood there.

But besides the small spin, it was a lot of fun. I hope that I could make other track sessions later during this year.

P.S.: I also had the opportunity to meet a very rare machine in Europe, ancestor of my skyline