A week of mechanical

Last week my brother-in-law let me access his garage and tools for a week to work on the 33.
Let's go with what have been done during this week :

1) Painting the center of brake discs
Mines had a rusty aspect that was not very beautiful so i decided to change that.

I had those since a long time but didn't had time to install it. Now it's done and that will fit perfectly with the future aesthetic change that I imagine. 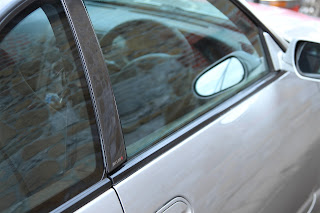 4) Replacing of the OEM turbo outlet pipe with TOMEI ones
One of the toughest job because those pipe are not the most accessible part in the car.
I had to remove all the intakes part and need to disconnect the rear turbo to gain some space to work.
The second problem was that I realised to late that the pipes I received were R34 one's (TOMEI has two reference 421201for R34 and 421101 for R32/33).
The problem is that I had a reprogrammed 32 ECU with 32 sensors (to allow me to drive with SP98 that we found in Europe). Those sensors don't have the same dimension than 33/34 ones.
As I don't have time to exchange the pipes or order adaptators for 32, we were forced to do some welding to modify the pipes I had.
I felt really sorry to modify such perfect parts but I thank the welder who works with my brother-in-law to allow me to go further.


5) Cleaning the front strut bar
No picture, just give a little refreshment to the bar and put a new "skyline GTR" sticker on it.

6) Replacing the OEM 17" wheels with my 18" ones
As the winter is finally gone, I decided to come back to the 18" wheels with "summer" tires 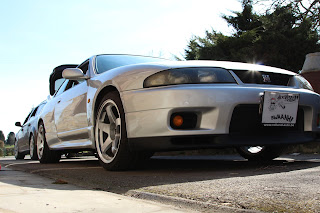 I nearly done all what I planned to do but i must admit that there were some moments when I curse myself from wanting to do it (nearly) by myself (i'm not mechanical at all for remembrance)
Anyway, the job is finally done and I think I don't will make any other "big work" on the car before a while (except solving my airbag/horn trouble and finding someone to install a boost controller).

Next step: a few cosmetic changes. More photos early May I hope.